Gordon Ramsay: The notorious, foul-mouthed bully and decorated British chef is emerging from the COVID-19 pandemic not with Michelin stars in his eyes but with cold, hard plans to open loads of mid-market “Street” restaurants all over the U.K. Yahoo reports that the chef’s group is moving forward with an “ambitious” expansion strategy led by new finance chief, Antony Perring, formerly of Leon and Wagamama, which will see 10 new restaurants open “by the summer.”

Ramsay and the money people around him seem poised to fill the void left by the collapse of the casual dining market in the three years leading into the pandemic. Pizza Express, Byron Burger, Cafe Rouge, Bella Italia, and Frankie and Benny’s were all, to varying degrees, hit by rising property and ingredients costs, rates, and increased competition. The pandemic simply hastened their inexorable decline.

But Ramsay, with ready made roll-out brands like GR’s Street Burger and GR’s Street Pizza, said that “Despite all of the pandemic related challenges, we have to be optimistic and forward thinking and invest back into our amazing industry.” These brands are the bish-bash-bosh of restaurant openings, perfect to slot into a void left by multiple crises: Comparatively low-cost, low-risk, low-lift, and low interest. But in a post-pandemic world of restaurant opportunities for the new, the creative, or the hitherto underrepresented, Ramsay’s “Street” brands are as disingenuous as they are cynical and uninteresting. Britain dared to dream; it looks like it’s getting a national kitchen nightmare.

Early on in the pandemic, and no doubt forecasting that borrowing money would be cheap and finding property would be easy, Ramsay bragged about wanting to open 50 restaurants in the U.K, while asking for the millions of pounds he needed to do it. Well, it looks like he got it and it looks like he might: In recent weeks, Ramsay has opened five restaurants, include three burger sites in London’s Charing Cross, Kensington, and Woking, Big Hospitality reports. But GR10 wants more, saying yesterday, 17 May: “We have an incredibly ambitious global growth strategy, and I’m delighted to have [Perring] on the team to help drive our future expansion plans.” Perring is responsible for Wagamama restaurants and Leon concessions situated all over the U.K.

All this is is despite the fact Ramsay’s U.K. restaurant reportedly portfolio lost over £56 million during the pandemic.

Ramsay has spoken of how lockdowns had been “utterly devastating” and that while he was “criticised for being wealthy, but the responsibility on my shoulders — the livelihoods at stake — is huge.” Ramsay was criticised because his company made 500 members of staff redundant early in the pandemic and subsequently failed to answer questions as to why they were not furloughed. 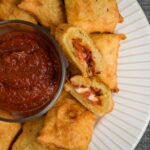